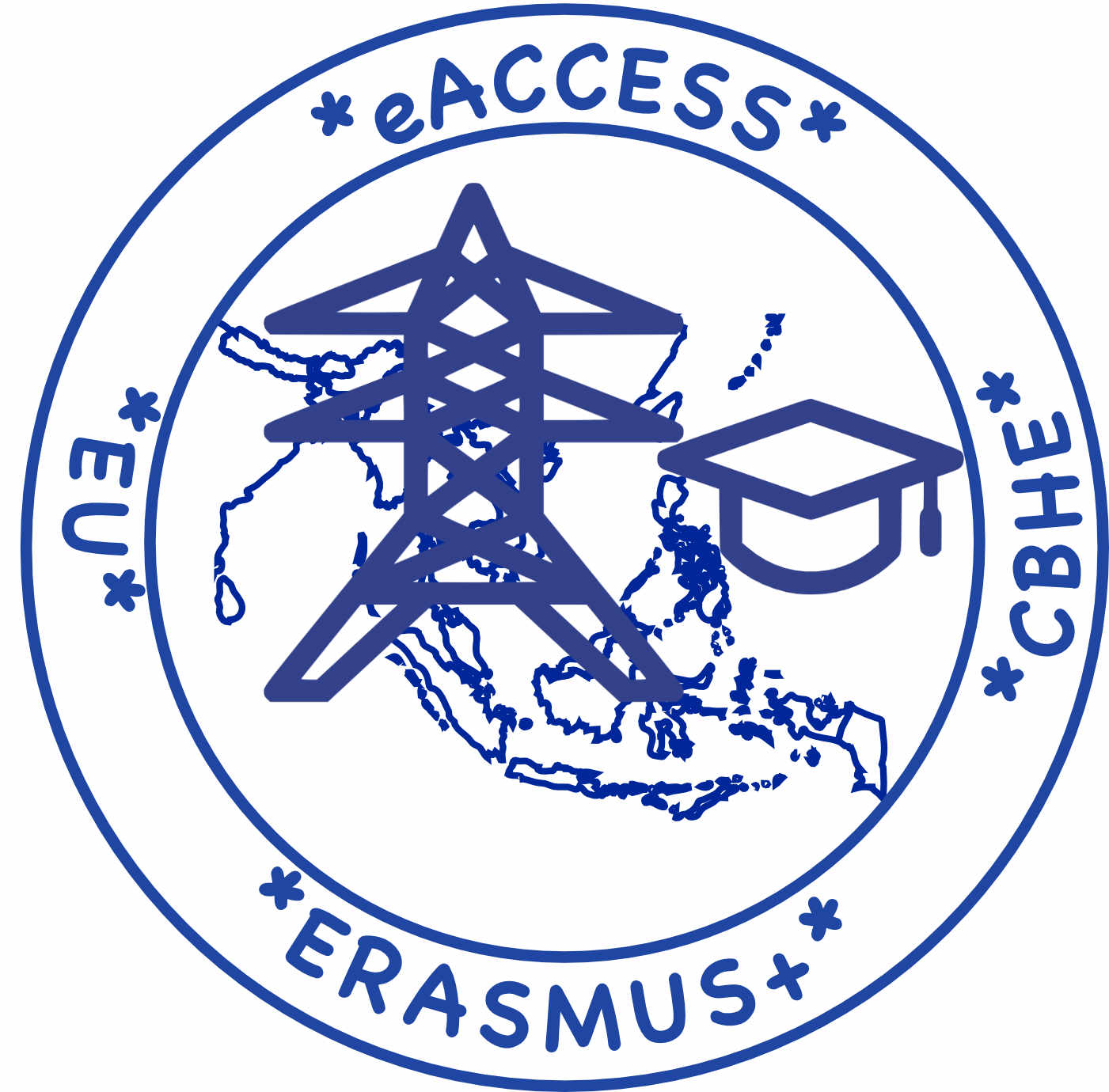 Supported by the Erasmus+ Programmed of the European Union: Capacity Building within the Field of Higher Education eACCESS Project number: 610041-EPP-1-2019-1-PL-EPPKA2-CBHE-JP

Soegijapranata Catholic University (SCU) eACCESS microgrid laboratory (eACCESS-MGL) was built for higher education and industrial workshops. This is a microgrid with 5,4 kWp PV arrays and 14,4 kWh batteries which are connected to utility (grid).

In the last one decade, the use of renewable energies has begun to grow rapidly. They are generally small in size and scattered. Similarly, wind power plants and photovoltaics have growth spready and are preferred because they are easy to built. The characteristic of such energies is intermittent. It means that they depend on availability of the sunlight or wind at a certain level. Therefore, the use of renewable energy must be integrated with utility.

Distributed Energy Resources (DER) including Distributed Generation (DG) and distributed storage (DS) are sources of energy located near local loads and can provide a variety of benefits including improved reliability if they are properly operated in the Electrical distribution system. Microgrids are systems that have at least one DER and associated loads, they can form intentional islands in the electrical distribution systems.

These PV Modules operate to produce electric energy from solar energy. The electric energy is in the form of DC quantity so in this application, a converter which can convert this DC voltage into AC voltage is required. SCU Microgrid Laboratory implements 10 x 540 Wp Photovoltaic Module (Monocrystalline type)

This inverter has capability to convert the DC voltage as the output of PV modules into AC voltage which will be transferred into the busbar. The inverter must also be functioned as maximum power point tracker to maximize the PV output power. A 4 kW three-phase inverter is used in the SCU Microgrid Laboratory. This type of such an inverter is grid follower inverter, it will act as a controlled current source so its required voltage reference from grid or from grid former inverter.

This will monitors all energy flows in the system, automatically identifies potential savings and facilitates efficient use of solar energy. Intelligent energy management is thus becoming even easier and more cost-effective

SCADA system must be capable to function for monitoring and controlling the system on different modes of operations. The quantities of voltages, currents, real power, reactive power, temperature and irradiation of the system must be able to be displayed on monitor graphically or in measurement numbers. Based on the measurements as the data, SCADA controls the status of the circuit breaker via the PLC.

Supervisory Control and Data Acquisition (SCADA) is a system of collecting information or data from the results of electricity measurements and then sending it to a central computer which will regulate, process, and control the data. The SCADA system is needed to handle a plant system by controlling, monitoring, marking, recording and retrieving data with a high level of complexity. The proposed SCADA system consists of a Master Terminal Unit (MTU), Human Machine Interface (HMI), Front End Processor (FEP), Data Communication Media, Remote Terminal Unit (RTU), and plants.

This SCADA system is formed by four components that have synergistic functions with each other, these components are:

Supervision and control functions in the SCADA system:

In mode the power absorbed by the loads is greater than the power generated by PV modules so it requires utility supply. PV-inverter will operate to convert DC voltage as output of PV modules into AC voltage and then transfer this power to the 220V 50Hz busbar. Another supply comes from the utility is also sent into 220V 50Hz as the PCC (point of common coupling) for the loads.

This mode uses the battery and the power absorbed by the loads is less than the power generated by the PV modules. In this mode, all power from the PV modules will be transferred in to the loads, then the rest of power will be supplied to  the utility or to the battery.

In this mode, the utility is disconnected from the microgrid so there are only two power sources: PV modules and the battery as energy storage. When the power absorbed by the loads is greater than the power generated by the PV modules, then the battery will supply the power to the loads through the battery inverter.