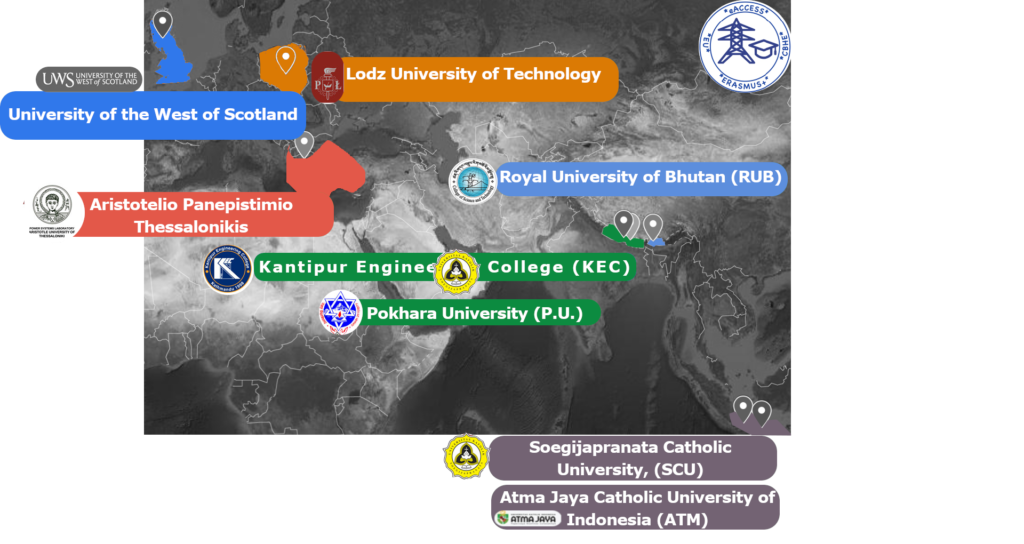 Lodz University of Technology is a public technical university established in 1945. It ranks as the 6th best technical university and the 5th most frequently selected by students in Poland. It offers 1st, 2nd and 3rd cycle of studies in around 60 study programs provided by 9 faculties and 3 interfaculty colleges. TUL’s staff consists of over 1500 academics and approx. 2800 administrative personnel. The University hosts approx. 20 thousand students, including 950 foreigners.
TUL is strongly committed to the internationalization of education and research. It offers a wide range of study programs in English and French at the International Faculty of Engineering (IFE). Selected courses are also taught in English at each of its faculties. The International Doctoral School which brings together young international researchers is the winner of the 2015 LUMEN Leaders in University Management competition in the category of ‘Internationalization’. The intensive development of mobility schemes under the Erasmus+ Programme (around 700 outgoing and incoming students each year) was acknowledged by the Polish Erasmus Agency, which awarded TUL the title of “Mobility Friendly University”. TUL is also a holder of the prestigious European Commission-awarded ECTS Label Certificate, Diploma Supplement Label as well as the HR Excellence in Research title.
TUL’s international cooperation in science, research and student exchange involves over 520 institutions in 65 countries. The University is recognized by world university rankings including The Times, QS, URAP, CWTS Leiden, US News, Multirank and Shanghai’s ARWU World Top Candidates.
The University participates in numerous EU co-financed projects in the framework of Erasmus+ KA1 and KA2, which aim is to increase the quality of the mobility, graduate employability and innovation in higher education.
The academic structure of the university consists of the following faculties: Faculty of Mechanical Engineering, Faculty of Electrical, Electronic, Computer and Control Engineering, Faculty of Chemistry, Faculty of Material Technologies and Textile Design, Faculty of Biotechnology and Food Sciences, Faculty of Civil Engineering, Architecture and Environmental Engineering, Faculty of Technical Physics, Information Technology and Applied Mathematics, Faculty of Organization and Management, Faculty of Process and Environmental Engineering, International Faculty of Engineering.

University of the West of Scotland With origins dating back to 1897, the University of the West of Scotland (UWS) began offering degree studies in the early 1900s and matured to University status in 1992 to be one of UK’s most innovative modern universities. UWS has been ranked by Times Higher Education in its top 500 universities globally. With about 16000 students, UWS has four academic schools and four campuses across the West of Scotland and one in London. UWS actively supports and encourages an interdisciplinary approach to teaching and research. In the Research Excellence Framework, each of UWS submissions ranked as having world-leading status in terms of their originality, significance, and rigor.
eACCESS is based in the Artificial Intelligence, Visual Communication and Networks (AVCN) Research Centre at UWS, which is a hub of cutting-edge research for Engineering applications of Artificial Intelligence, Optimization/Scheduling problems in Power Systems and Smart built environment. AVCN has 8 research active members, 5 postdoctoral fellows, and more than 30 doctoral students. AVCN has a proven track record of leading national and international projects from the European Commission, Research Councils UK, Innovate UK and Scottish Funding Councils.
Project Manager: Keshav Dahal
Address: School of Computing, Engineering, and Physical Sciences, University of the West of Scotland, High Street, Paisely, PA1 2BE, UK
Email: keshav.dahal@uws.ac.uk

Aristotle University of Thessaloniki (AUTH) is the largest University in Greece, with 1,737 faculty members and 86,241 students. In the last 3 years, AUTH has collaborated with 1,700 partners (Universities, Research Centers and Companies) for the implementation of 3,500 RTD Projects. The overall budget of these projects reached 150 M€. The corresponding annual turnover is around 50 M€. The work of this project will be carried out by the Power Systems Laboratory (PSL) of the School of Electrical and Computer Engineering of AUTH. PSL is an active research group in the power systems field, with interests covering a wide range of power systems technologies and recently the area related to the restructuring of the electric power utility industry and corresponding software tools. PSL has been Capacity Building in the field of Higher Education – Joint Projects EU-Asia Collaboration for aCcessible Education in Smart Power Systems (eACCESS) involved in more than 50 contract projects, mostly related to research on power systems, renewable energy resources, demand response, consumer behavior modeling, energy management systems, and IT applications.
Project Manager: Dimitrios Lampridis
Address: School of Electrical and Computer Engineering, Aristotle University of Thessaloniki, PO Box 486, GR-54124, Thessaloniki, Greece
Email: labridis@ece.auth.gr

Kantipur Engineering College (KEC), the oldest engineering college affiliated to Tribhuvan University, was established in 1998 with the basic objective of creating an excellent platform for providing excellent quality education for the engineering studies in Nepal. The College at present is one of the premier private engineering colleges in the country. Presently, KEC is conducting BE programs in Civil, Computer and Electronics, Communication & Information Engineering. The college also has fully functioning Research, Training and Consultancy Division (RTCD). The division works with national and international universities, government agencies, NGOs, INGOs and consultancies to enrich the engineering know-how and contribute the nation in developing activities through cutting edge research activities. RTCD of KEC had been participating in many research activities here within Nepal and it was active in training employees and students abroad in different EU universities. KEC was involved as a partner institution in Euro-Asia Link Project TH/Asia Link/004 (91712) and Erasmus Mundus eLink (372554-EM-1-2012-1-UK-ERA MUNDUS-ERA21), cLINK (ref.372242-EM-1-2014-1-UK-ERA MUNDUS-ERA21), FUSION (ref.545774-EM-1-2013-1-UK-ERA MUNDUS-EMA21) projects and has worked as a joint- coordinator of SmartLink (ref.552077-EM-2014-1-UK-ERA MUNDUS-EMA21) project. Currently is involved as a partner institution in the SUNSpACe project (ref. 598748-EPP-1-2018-1-FR-EPP-KA2-CBHEJP), eACCESS (EU-Asia Collaboration for aCcessible Education in Smart Power Systems) and YETIS (Yes to Energy Through Innovative Sensing).
This institution has played key roles in the consortium since 2005 and with the help of these projects more than 100 students, PhDs and staff have been relocated to Europe.
Project Manager: Rameshwar Rijal
Address: 8849, Kathmandu, Nepal
Email: rijal_rameshwar@kec.edu.np

Nepal adopted the multi-university concept in 1983. The idea of Pokhara University (PU) was in 1997 under the Pokhara University Act, 1997. As a non-profit autonomous institution, PU is partly funded by the Government of Nepal and partly by revenues from its students and affiliated colleges. Its main aim is to produce skilled human resources necessary for national development by providing quality education. In order to achieve such objectives, semester system-based curriculum and evaluation were carried out with high priority to practical knowledge and researches.
Pokhara University developed its 7 constituent schools where bachelor level programs, master level programs and Ph.D. programs are running. Pokhara University has started its programs with private participation. At present, there are 58 academic institutions under its affiliation. The University has 4 constituent Schools, 4 Joint Constituent Colleges and 54 affiliated colleges and running about 43 different programs. The programs are running under the following faculties: Faculty of Science and Technology, Faculty of Health Sciences, Faculty of Humanities and Social Sciences, Faculty of Management.
Project Manager: Buddhi Raj Joshi
Address: Pokhara-30, Kaski, Nepal
Email: dean1519@pu.edu.np

The Royal University of Bhutan (RUB) is the only University in the Kingdom of Bhutan with MORE THAN 10000 students spread over eight colleges. It was set up in 2003 to look after the management of tertiary education in the country. The University is set up on a federated system with member Colleges spread all over the country. Its vision is to be a highly recognized seat of excellence for the tertiary educational provision that advances knowledge, improves the quality of life, enhances socioeconomic development and promotes national happiness, and the mission to continue to enhance access to tertiary education and its quality through the advancement of research, modes of teaching and learning, innovative pedagogy and creative use of technology.
The College of Science and Technology (CST), located in Phuentsholing is one of the two engineering colleges in Bhutan offering a Bachelors program in Civil, Electrical, Electronics, and Communication, Information Technology, Architecture, Engineering Geology and Instrumentation and Control Engineering and Master of Engineering in Renewable Energy. It is also planning to launch a Masters in Construction Management soon. CST is one of the founding members of the Royal University and currently has around 1000 students. The provision of quality education to its youth is given the highest priority by the government and the citizens of the country in the pursuit of becoming a knowledge-based economy. The Royal University of Bhutan is the only University that has the responsibility to make this dream come true and seeks to learn from well-established institutions/universities. Internationalization is a key component of the university’s aspiration. In this regard, the college has excellent collaborations and linkages with industries, academic institutes, and professional bodies. It has signed 28 MOUs (18 international and 10 national) with several esteemed relevant stakeholders. The College has been able to build its academic and research capacity through collaborative activities mostly with European Union universities. The college has hosted 15 EU faculty members and 10 students on exchange programs so far. The college target to enroll at least 3% of international students in 2020 and gradually increase to 10% by 2025.

Atma Jaya Foundation was formed by a group of young Catholic intellectuals on 1st June 1960 and this foundation established a catholic university named Universitas Katolik Indonesia Atma Jaya (Atma Jaya Catholic University). Presently, Unika Atma Jaya has eight faculties with twenty-one Sarjana (Bachelor’s Degree) program founded in different years: The Faculty of Economic and Business Administration and Communication were founded in 1960; the Faculty of Education and language and the Faculty of Engineering were in 1961; the Faculty of law was in 1965; the Faculty of Medicine was in 1967; the Faculty of Psychology was in 1992, and the latest one was the Faculty of Biotechnology in 2002. Atma Jaya also has eleven Magister (Master’s Degree) programs: Magister Management (MM) and Magister in Applied English Linguistics (LTBI) in 1992; Magister in Professional Psychology in 2005; Magister in Biotechnology in 2011; Magister in Psychology; Magister in Law in 2012; Magister in Mechanical Engineering in 2013; and Magister in Electrical Engineering in 2015, as well as two Doctoral programs: in Applied English Linguistics in 2002, and in Psychology in 2017. The university’s vision is to be a leading university with academic and professional excellence at the international and national level which consistently expresses the combination between the Christian Faith, science and technology, as well as the Indonesian culture in its effort to develop the people’s mind. The University carries out the following missions:
• To implement an academic and professional education to develop the science, professionalism, and characteristics of the students.
• To carry out basic and applied research to advance science, technology, and art and culture (IPTEKS)
• To volunteer its expertise in the field of IPTEKS for the benefits of society.
• To manage the university effectively and efficiently in an ethical and prestigious academic atmosphere.
Project Manager: Budi Kartadinata
Address: Jl. Raya Cisauk-Lapan, Sampora, Banten 15345, Indonesia
Email: budi.kartadinata@atmajaya.ac.id